Sorption of hydrogen by different carbon nanostructures (buckyballs, nanotubes, graphene) is extensively studied worldwide in the course of R&D of reversible hydrogen storage for renewable hydrogen energy as well as of new functional nanomaterials. One of them is Graphane, a double-sided chemisorbed hydrogene coverage of a Graphene. Graphane was first obtained, by means of plasma vacuum deposition technique, in 2009 with a participation of Nobel laureates A. Heim and K. Novoselov.

Hydrogenation significantly affects the transport characteristics of Graphene and leads to changes in its morphology, electrical and magnetic properties. Intermediate states between the conductor (Graphene) and the insulator (perfect Graphane) are expected in Graphanes with different degrees ? of Graphene coverage by hydrogen. The optimization of the processes of their synthesis caused a considerable theoretical interest in the kinetics of hydrogen chemisorption on Graphene and the morphology of Graphane.

In 2015, a computer simulation was carried out in SPE RESST to investigate the Graphane production process by two-sided deposition of atomic hydrogen onto the atomic plane of Graphene at epithermal energy slightly above the chemisorption threshold. The specific goal of this study was to identify the influence of structural factors on the kinetics of deposition and to elucidate its differences from the predictions of the simplest model of Random Sequential Adsorption (RSA) of atoms.

A freely distributed OVITO package and a developed package of coordination analysis routines written in the Python programming language were used for visualization and analysis of simulation results.

A specific nonlinear dependence of the deposition rate on the achieved degree of coverage was revealed (see Figure 1). It was explained by the instantaneous atomic reconstruction of a nearby surrounding of a Graphene lattice site during the hydrogen atom chemisorption onto it. This is followed by the formation of local configuration structures characterized by significantly different adsorption probabilities on free lattice sites. As a result, and unlike in the RSA model, the spatial correlation of the adsorption probabilities arises.

Fig. 1 – The dependency of coverage degree Θ on the hydrogen fluence τ normalized to one site of a Graphene honeycomb lattice of (a) and the coverage dependency of the hydrogene deposition rate (б). Markers — molecular dynamics (MD), dashed curves — calculation results within the RSA model of uncorrelated deposition, solid line in figure (б) — the results of calculations in the framework of the proposed phenomenological kinetic model

The different nature of the Graphene reconstruction by single- and double-sided hydrogen deposition entails significant differences in the kinetics of Graphane synthesis at small hydrogen fluences (see Figure 2) for these two cases. 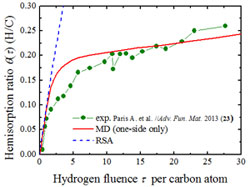 Fig. 2 – The dependence of Θ(τ) for single-side deposition. Experimental (markers) vs. the results of MD modeling for hydrogen deposited only onto one side of Graphene (solid curve)

Coordination structural analysis of simulation results has revealed the successive structural-phase transformations of Graphene–to–Graphane in bilateral deposition, which are due to the phenomenon of hydrogen clustering (see Fig. 1 (б), Fig. 3 (a–в) and Fig. 4 (a)).

Fig. 3 – Maps of the distribution of chemisorbed hydrogen over the Graphene surface at coverages ? corresponding to the three characteristic critical points of the deposition rate behavior of Figure 1(б)

One can distinguish three stages of Graphane synthesis separated by critical degrees ΘI,II of coverage. The are:

Stage I is the germination of hydrogen clusters on the weakly reconstructed Graphene at Θ < ΘI (see. Fig. 3(а)),

Stage II is their growth in size at ΘI < Θ < ΘII, which leads to formation of tessellated structure (network) of intercluster boundaries (see. Fig. 3(б)),

Stage III is a sluggish dissolution of H-clusters' boundaries and formation of divacancies and closed loops of empty sites of Graphene. Their stability against deposition determines the maximally achievable degree of coverage Θmax (see. Fig. 3(в)).

At the final Stage III of synthesis, only the edges of the linear sections of blocked intercluster boundaries remain accessible for deposition. This is a topologically specific mechanism of their dissolution which contributes to formation of sustainable vacancy loop type extensive defects of a Graphane.

With increasing degree Θ of hydrogen coverage, it can be rated as a Graphene-like at Stage I and a Graphane-like at Stage III. Stage II (ΘI < Θ < ΘII) is a transition one between these two structural-phase states.

Synthesized Graphane has a polycluster structure of an unordered frustrated agglomerate of sintered clusters of Graphane allotropes (chair, boat, stirrup, see Fig. 4(б)) with different short order and maximum size of H-clusters up to several tens of atoms.

The phenomenological model of Graphane synthesis chemical kinetics was built by introducing the coordination-dependent deposition probabilities. This model well described the results of MD-simulation (see Fig. 1(б)). It also predicted that the critical points ΘI,II of deposition rate changes are not independent, and both can be expressed in terms of the maximum concentration of H-clusters, Kmax = max{K(Θ)} (see Fig. 4). Thus, critical phenomena in deposition are determined by the maximum concentration of hydrogen clusters.

The results of the theoretical study revealed structural-phase transformations as an important factor that can significantly affect the kinetics of the Graphane synthesis by deposition of atomic hydrogen.

It should be noted, however, that predictions of the simulation performed are not closing because of limitations of the applied purely classical approach with an empirical interatomic potential. Research will continue toward ab initio quantum chemical accounting of spin effects and their influence on the kinetics of Graphane formation, which is planned to explore by means of the kinetic Monte Carlo (kMC) method.
2008- © SPE RESST
| home NSC KIPT | русский | site map | сontacts |
SPE RESST:
1, Akademicheskaya St.,
61108 Kharkov, Ukraine
Phone: +38 (057) 335-64-4
Design : A.N. Odeychuk      thank to : u · com