The cost of uranium production in the world

The cost of a kilogram of enriched oxide-uranium of U3O8 grew from 22 USD/kg in 2003 to a peak of 220 USD/kg in middle of 2007. Later the cost decreased, and now fluctuates between 90 USD/kg and 130 USD/kg with some upward trend (see Fig. 1). It should be noted that in Fig. 1 shows conditional prices, because there is no open world market for uranium, as opposed to, for example, gold 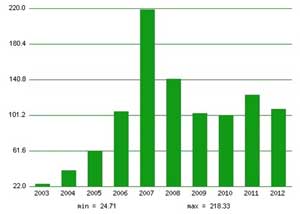 It should be noted that some of the countries shown in Fig. 2, deliberately did not report the valuation and the value of the resource base for reasons of commercial confidentiality. 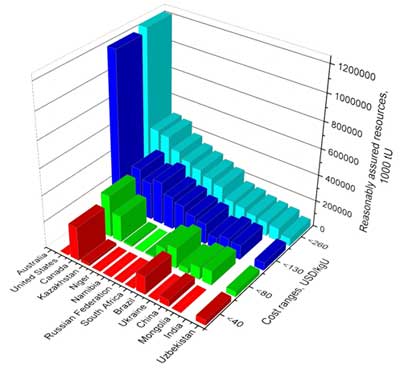 Uranium reserves with a cost price of less than 80 USD/kg are decreasing, and in the future Ukraine expects the following volumes of uranium with significantly higher prime cost:

The uranium content in the tailings dumps of low enriched of Pridneprovsky Chemical Plant in Dneprodzerzhinsk.

As a rule, the degree of extraction of uranium from ore is quite significant: 95 – 98 % (RF); 93 – 94 % (Ukraine); 72 – 88 % (Australia). This means that a fairly large amount of uranium is sent to the dumps of uranium production, the production cost of which is sufficiently high by the hydrometallurgical method, that is > 260 USD/kg U. Thus, in Ukraine average uranium content in dumps can reach values of 0.006 % or less.

To attract "dump" uranium to the uranium balance of Ukraine, it is necessary to find methods for its economically profitable extraction. To implement this, it is advisable to use the well-proven method of uranium extraction from tailing material with supercritical carbon dioxide (SFE-СО2).

The cost of SFE-СО2 of uranium from tailings dumps of Pridneprovsky Chemical Plant in Dneprodzerzhinsk.

The materials and reagents, their quantity and the sequence of steps of the SFE-СО2 process of uranium complexes from the tailings dumps of the Pridneprovsky Chemical Plant of Dneprodzerzhinsk are determined.