The NSC KIPT sited charged particles accelerators are widely used to support R&D of radiation damage physics and radiation material science. The accelerator based "simulation" irradiation of materials is supplementing the standard practice of their large-scale reactor tests and is an economically efficient resource saving technique of the express assessment of their behavior and performance in a totally controllable irradiation environment.
Beryllium, one of the most studied functional material of nuclear engineering, manifests the non-trivial properties and effects (e.g., superplasticity) promoted by its pronounced anisotropy. This also applies to the impact of point defects on its electronic structure and the low-temperature transport properties particularly regarding the structural sensitivity of its superconducting transition temperature Tc.
In 2017 SPE RESST R&D, the previously developed methodology and software for multiscale computer modeling of radiation effects have been applied to the characterization and planning of cryogenic irradiations of beryllium at the NSC KIPT electron linac ELIAS. By the successive application of the methods of microscopic atomistic, mesoscopic kinetic and macroscopic continuum modeling, the influence of the anisotropy of Be lattice on the accumulation of radiation damage under electron irradiation at various temperatures is elucidated along with the influence, on it, of the initial dislocation structure of irradiated targets. 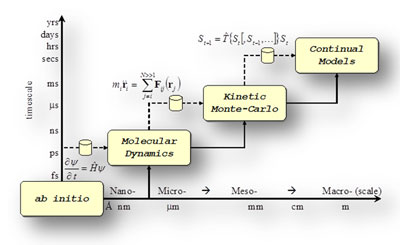 The quantitative distinction of the results of the target primary radiation damage explicit atomistic simulation from the NRT standard model predictions has been found. The considerable (about 25%) contribution of atomic collision cascades into the spatial distribution of the ELIAS linac's electron beam primarily produced Frenkel pairs has been revealed.

Using the ab initio calculated data on the structure and migration of point defects in Be, molecular dynamics simulations were applied to evaluate the parameters of the elastic interaction of Be self-interstitial atoms (SIA) with dislocations sinks. Reliable estimates of the dipole-force tensor and the interaction energy factor U0 = 0.63 eV have been obtained.

Based on the temporal evolution of point defects multiscale modeling data, the efficiency of introducing vacancies into the material was calculated. It has been shown that the application of cryogenic (77 K) electron irradiation of Be targets prestrained up to ~1012 cm–2 dislocation density allows suppression of the Frenkel pairs recombination cause of the freely migrating SIAs departure to dislocation sinks. This results in the abnormally high (~10–3 per atom) yield of residual vacancies which is well comparable with that of primarily produced Frenkel pairs at a reasonable (<103 h) ELIAS linac e-beam exposure.

Figure 3 – The atomic concentrations of residual vacancies plotted vs. those of the primary Frenkel pairs (FPpa) initially produced at an electron beam exposure time t0 (top axis) in Be targets of various dislocation densities ρd (solid curves) in comparison with those predicted with a simplified isotropic model (dashed curves).